A New Year - Are You Ready for Change?

December 31, 2022
Reflecting on the year we have journeyed through has been one of challenges and change. Change occurs, even when we do all we can to ensure that we continue our path in comfort and routine.  Sometimes, the pathway is rocky with pebbles we slip on or stones on which we stub our toe; there may be a large rock that requires help to push out of the way. As we journey together on life's path, let's help one another by sweeping off, picking up, and removing the stones that people slip on or stub their toes on.  We must learn to ask for help when the large rocks cannot be removed by our strength alone. What are a few practical ideas we can undertake to prepare for the new year? Declutter your office.  Don't be afraid to work through the paperwork and items in your office and make some tough decisions about what is really needed or what should be relocated to another area of your house. Plan and set up your daily/weekly/monthly planner. (I use a color-coded system to assist with k
Post a Comment
Read more
Recent posts

December 16, 2022
Right now - where are you in your dreams, life, job, and plans? Content? Perhaps you're between jobs, looking for a change, wanting to embrace a dream or use your talents to create your own business? There is only one (1) of you. Whatever your past, you are one of a kind. Unique! How can you embrace your experiences, talents and skills to make a difference in your life and your community? In the book of Esther, we read about a young woman whose life was interrupted by a king. Did she have control of her life? Probably not, as far as being gathered with other young women, placed at the Palace, given beauty treatments, etc. Sounds glamorous, doesn't it? However, Esther was not able to go before the King unless summoned. Her life was dictated by another.  Yet, when Esther had to face hard decisions, she fasts and prays, asking others of her faith in the city come alongside her and do the same. Her uncle tells Esther, "The fact is, even if you remain silent now, someone else w
Post a Comment
Read more

November 28, 2022
Over the past few months, significant changes have occurred in our family life. Changes in employment, our youngest graduating from High School, and myself, taking up a new Not-For-Profit executive position. Change can bring the feeling of being uncomfortable and challenging, and certainly cause you to either embrace it or hide away. Undergoing change in your life is not comfortable. Often friendships formed in the workplace, and other organizations change, even end. Relationships change. Finances change. Family life changes. Recently, I have been reflecting on how to embrace the changes positively. Is this easy? No. But to live life to be effective means being willing to change, even when your mind is screaming NO! To begin this process, I have begun: Getting up earlier in the morning and having breakfast (or a cuppa) with my husband. General House tidy-up (making the bed, cleaning bench tops, washing, dishes, general household duties). Set time aside for reflecting on God’s Word. Dea
Post a Comment
Read more

November 08, 2022
Those who know me, they will understand that I am usually organized. I have lists everywhere, a planner colored for the month ahead, a diary (digital and/or paper) reflecting what's coming up, where I need to be, what needs to be purchased and bills to be paid. It's Important to Plan With the busyness of life in our modern society, it is important to plan - at least have some idea of what's coming up, what bills need to be paid, and what appointments must be attended. It's easy to say, "well, I get to that when I feel like it," and for some, I guess that works.  However, having a plan of action helps to lower stress levels, and ensure we get to those important appointments and events on the right day and at the right time. Can you imagine missing your child's special day at a school event or forgetting an important medical appointment? Planning can be simple, or, depending on your work, voluntary positions, and demands on your time, more complex.  By plann
Post a Comment
Read more

Staying Organised In A Chaotic World

October 31, 2022
Have you noticed how easily you can be distracted by news, social media, messenging and general life? We all have busy lives.  Often we are simply trying to get through the day - complete work deadlines, make the NFP meeting we've committed to, get a  meal on the table, ensure the children's homework is done. One way I have found to stay organised in the chaos is to simply take 10 minutes every few days, sit down with my diary (online/paper/planner, whichever works for you) and check through the week.   What is coming up - meetings and events? What do I need to purchase - grocercies, gifts, etc? What bills are due - vehicle registration, electricity, mobile phone account? What deadlines do I need to meet for work or N-F-P committee? What jobs need to be completed around the house? You may have other questions that need to be addressed and noted into your diary. That's what a diary or planner can assist you with. Helping to keep you focused and organised so that by the end o
Post a Comment
Read more

October 17, 2022
Teamwork.  We often hear this word, read about the importance of it and in our workplaces are encouraged to participate in it. What is Teamwork? The Cambridge Dictionary tells us, "the activity of working together in a group with other people, especially when this is successful." Teamwork isn't always easy.  Some people find it much more appealing to work alone, whilst others relish the opportunity to work with others. Teamwork, when everyone in the group chooses to participate and work together, can lead to creative and successful outcomes.  To achieve successful outcomes, all participants need to intentionally  ensure a numbe of actions occur. 1. Turn Up on Time!  Meetings (either in person or online) to brainstorm, collerabrate, and compile are important and it is very frustrating if participants are late joining the meeting or not turn up at all.  If you are part of a team of people, then TURN UP! Turn up to participate, turn up on time, be proactive. 2. Do Your Par
Post a Comment
Read more

Some Things Have To Change

October 06, 2022
Life happens...change is inevitable. Change comes, whether we are ready or not. Sometimes it's in our control, usually, we have little or no say in change. How do we cope? Do we accept change or reject it? What is the impact on our lives, our careers, and our beliefs? There are a few points that we do know: 1. Change will come whether or not we accept it or reject it. 2. Change may impact our lives, but we can learn to be adaptable. 3.  Change may be difficult at the moment, but the doors open to new possibilities, and new career choices. 4. Change is not something anyone wants to go through; our faith and beliefs are strengthened when we draw near to the Lord instead of pulling away. Some verses to help: Psalm 51:10 Philippians 4:13 Proverbs 18:10 Psalm 91:2  Change brings about growth - in our character, in ourselves, in our faith and beliefs. We may not have much say, but how we respond will show either a positive or negative stance as to who we are.  Whilst change will occur,
Post a Comment
Read more
More posts

Live to Make a Difference 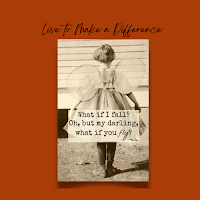 How to Be Successful?

"To be successful at anything, you must simply be what most people aren't: Consistent" Anon

Sally-anne
Yungaburra, QLD, Australia
Life to Make a Difference! Life can be like cake. It's all good when it tastes nice. But when you forget the sugar or key ingredient, it can taste horrible. When all is going well in your life, and you're 'happy ', life can 'taste ' good. However, the trials, difficult situations can 'taste ' bad. That's when we need to re-adjust our recipe! Eat cake, good cake!